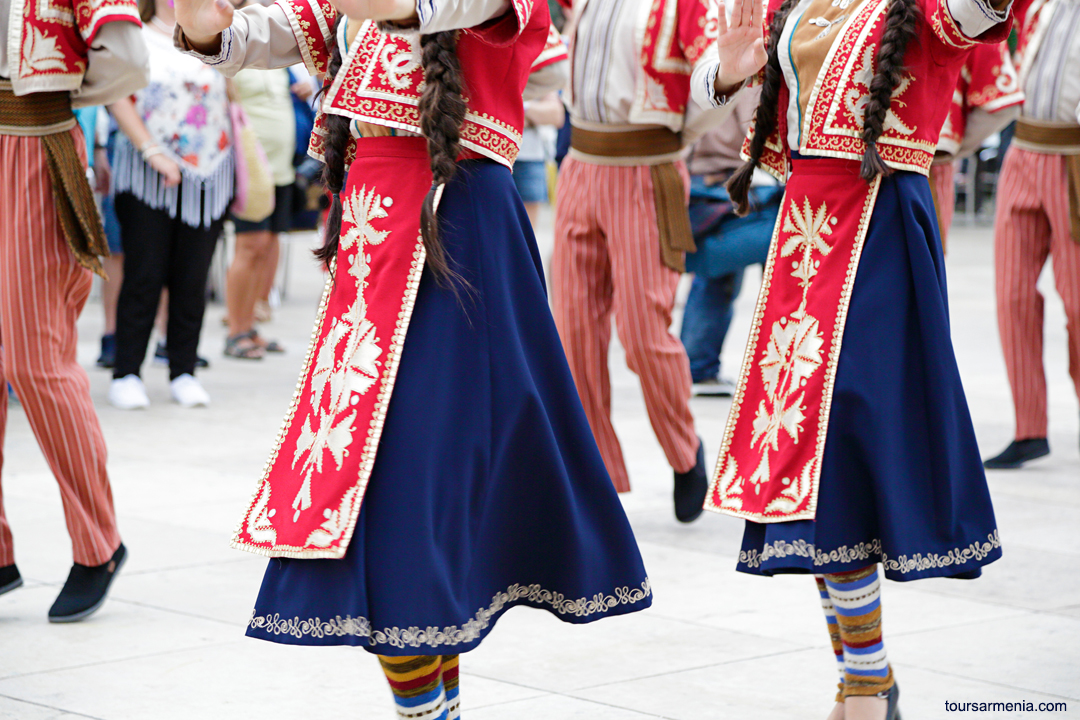 Armenia is one of the oldest countries in the world, with its traditions, history, culture, art and more. Noteworthy to mention that the religion, family life, and the rituals and traditions expressed in the culture, have played a powerful role in helping Armenians around the world hold on to a strong sense of identity and heritage. The culture of Armenia encompasses many elements that are based on the geography, literature, architecture, dance, and music of the people.

Armenian literature dates all the way back to the 5th century BC, and many literature arts and masterpieces were created by most celebrated persons of that period, such as Moses the Chorene (410 AD), Mesrop Mashtots (360 AD), and others.

One of the greatest things representing the Armenian people is, of course, the music and dance. Worth to mention that the Armenian art of dance and music dates back to the 5th-3th millennia BC, since there were found several ancient petroglyphs in the Armenian Highlands depict dancing figures. Another great evidence is the philosopher Plutarch’s description about an amphitheatre performance 2,000 years ago.

One of the oldest Armenian dances—which is still performed today—is the kochari, which was originally addressed to the relationship between mortals and the divine.

The Armenian sound art considered to be unique from the times of its existence. There are more than 30,000 folk songs catalogued by the Scholars from the Armenian Highlands. Traditional music is modal and often has a strong, lyrical melodic line and distinct folk style. Many songs serve express purposes, such as worship, planting, funerals, romantic love, patriotism, and other acts of daily life. Over 100 musical elements are sung during Armenian weddings alone.

It is worth mentioning that the indigenous musical instruments are an essential in the Armenian culture. It includes the duduk (a double-reed pipe), oud (a short-necked lute), zurna (a woodwind instrument), and kopal (a large, two-headed drum). These instruments are widely used in music and performances even today.

The art of the carpet making is an essential in the Armenian culture, since it is an ancient handicraft that is still practiced today. Traditional Armenian rugs have bright colors and decorative motifs such as dragons, stylized geometric shapes, and other ornamentation that can be highly symbolic. The rugs are widely used all over the world.

Another great example of the Armenian culture is the Khachkars or the Cross-Stones. Those stone figures have widely used in the Armenian architect and sculpture art, and mostly adorned the ritual and worship places, such as cathedrals, churches, temples and cemeteries or memorial complexes in Armenia.  Khachkar building peaked in the 12th and 14th centuries. Today, more than 50,000 unique, hand-carved khachkars survive.

Another important factor of the Armenian handcrafting is the jeweler making. Armenian jewelers have been creating beautiful and unique jewelry from gold, silver, and precious stones for both men and women for thousands of years. A lot of jewelry carried special symbolism and served as amulets; some could be worn only by women or men of a certain status.

Armenian culture is truly unique and outstanding and just in one post it is not possible to get acquainted with it. That’s why the Tour Advice Armenia Team offers the best packages experiencing the local art, history and culture.

GIVE A REPLY Cancel reply

This site uses cookies. By continuing to browse the site, you are agreeing to our use of cookies.

We may request cookies to be set on your device. We use cookies to let us know when you visit our websites, how you interact with us, to enrich your user experience, and to customize your relationship with our website.

Click on the different category headings to find out more. You can also change some of your preferences. Note that blocking some types of cookies may impact your experience on our websites and the services we are able to offer.
These cookies are strictly necessary to provide you with services available through our website and to use some of its features.

Because these cookies are strictly necessary to deliver the website, you cannot refuse them without impacting how our site functions. You can block or delete them by changing your browser settings and force blocking all cookies on this website.
We also use different external services like Google Webfonts, Google Maps and external Video providers. Since these providers may collect personal data like your IP address we allow you to block them here. Please be aware that this might heavily reduce the functionality and appearance of our site. Changes will take effect once you reload the page.